Located in Falmouth, Nova Scotia, Recovered Treasures Furniture Restoration has been the premier upholsterer Nova Scotia and Maritimes residents call on for quality restorations and reupholstery service since 1980.

Our business grew from a hobby and was established in 1980. We specialize in antique furniture re-upholstery, old-fashioned furniture restoration, and heirloom furniture refinishing.

A parade float cover is the largest item we have made to date. We’ve also handled boat covers, padded headboards, truck and car seats, and we welcome custom work. We also provide repair and refinishing services for a variety of wood furniture.

Our clients come from all areas, both residential and commercial, and we are proud to include many hotels and inns as names on our list of satisfied customers.

No job is too large or small.

Don't throw out that tired, damaged old sofa or chair - Refurbish, Recycle and Recover a Treasure!

We offer a wide range of upholstery services. Our motto is ‘No job too large or small’ and our expertise covers many things including all types of furniture, much of which is antique.

Our craftspeople can provide a result to reflect your individual taste & lifestyle that you will be very pleased with. We offer a wide range of fabrics, or you can supply your own.

Starting in 1980 with an idea, "Recovered Treasures Furniture Restoration" has become synonymous with high quality workmanship and reliability.

*With thanks to Fred Lawrence of the Hants Journal and his article from Feb 4, 2004.*

Maureen and Alan Perry, originally from England, moved to Nova Scotia in 1972 when Alan was working for the Simmons Mattress Company. With no family or connections in the province, they began taking evening classes in reupholstering. With Maureen working full-time in an office, the two juggled their time until they decided to start Recovered Treasures in 1980. They worked closely together in their early 19th century home and workshop until Alan’s death in 2015.

Today, Maureen, her son Stephen and a number of dedicated craftspeople make up the team of Recovered Treasures Furniture Restoration, and they have built an impressive portfolio of furniture refurbished from homes and businesses throughout Nova Scotia and beyond. Their heritage “New England farmhouse” home showcases many of their finished pieces in a beautiful and functional setting. 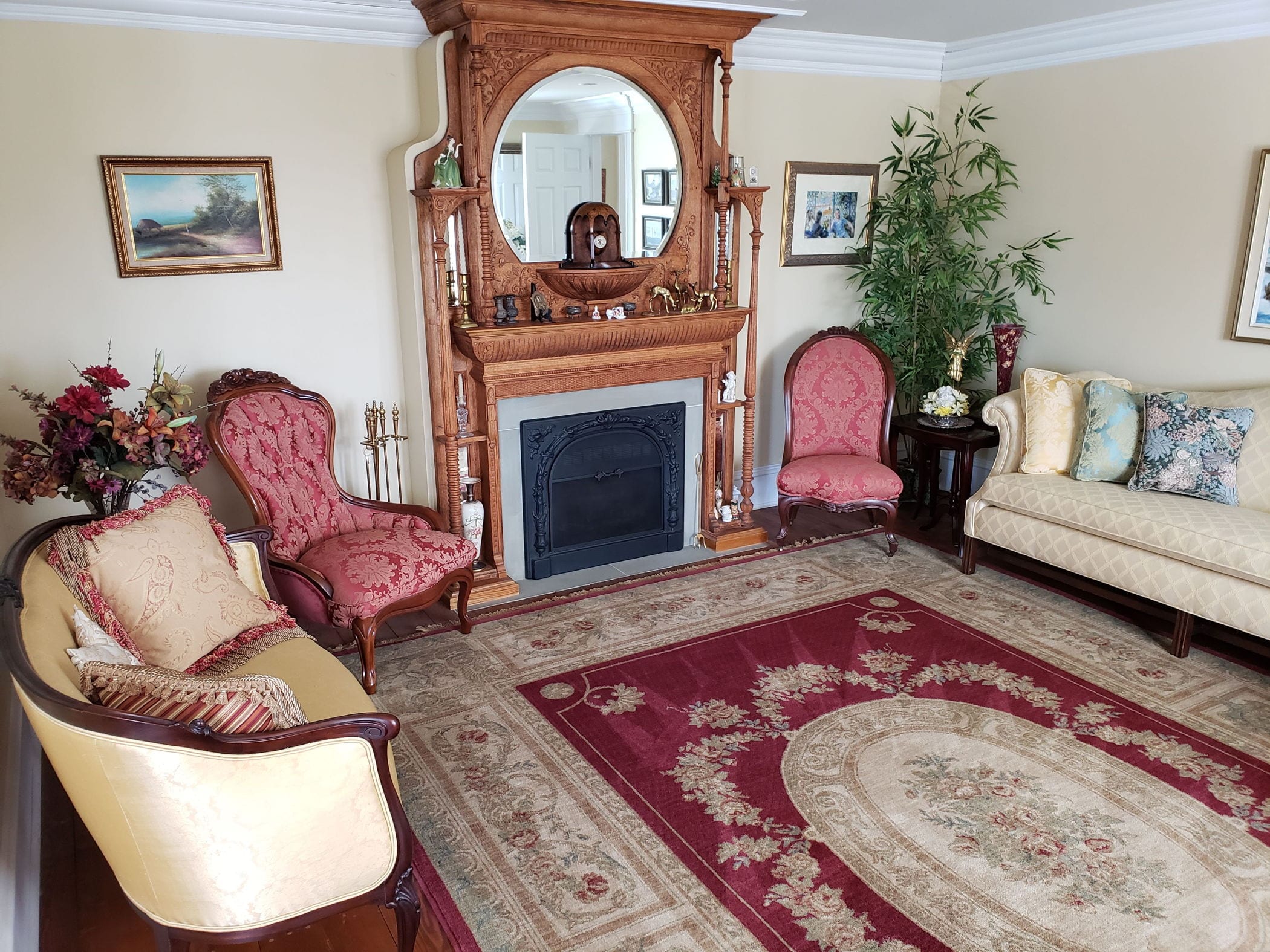 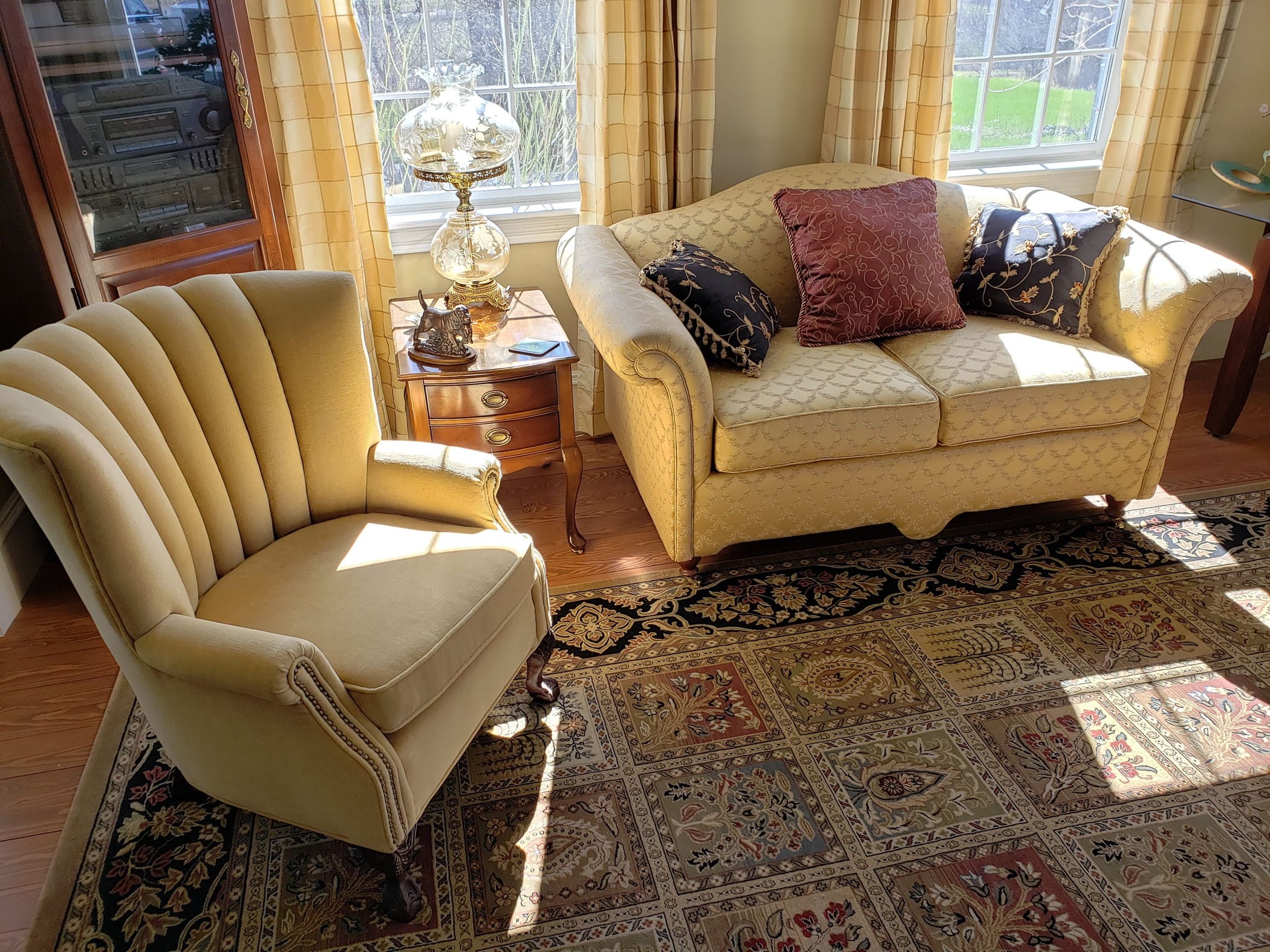 Work at Recovered Treasures takes place in our bright workshop which serves as a warehouse for an array of materials, workstations and equipment. Our equipment includes our large vintage industrial Serger, materials of all stripes and colours, and all the tools we need to complete the job – and of course, all the assorted pieces that are waiting to brought back to their former glory.

Stephen does much of the wood refinishing and structural work. “Older people are the only ones doing this so I guess I’m helping to revive a rare trade that I really enjoy.”

Major restoration projects include places such as the Blomidon, Victorian and Tattingstone Inns of Wolfville, The Lord Nelson, Blomidon House, Prince George Hotel, and other landmarks in Halifax. Celtic Lodge in Cape Breton is also on our client list.